Piriapolis has made a good move to seduce investments. The construction of the new port in the city of Piriapolis is under way and will surely position this wonderful beach resort to be one of the best tourist destinations on the coast in Uruguay.

A City to Discover

A sightseeing trip to Piriapolis is one of the best experiences for anyone visiting Uruguay. This town, created in the image and likeness of the French Riviera resorts, has all the necessary facilities for tourism offering natural landscape and urban design that has nothing to envy the most famous resorts in the world.

The summer season runs from December to March. During that time Piriapolis receives thousands of visitors from all over the world. In low season, Piriapolis has a stable population of 10,000 inhabitants.  But even during the colder and windy days, Piriapolis offers enough charm to attract the travellers seeking rest and contact with nature. The accommodation consists of its hotels, campsites and spectacular apartments with magnificent views of the coastline and incredible sunsets.

The port of Piriapolis is now receiving one of the largest investments since it was built in 1916. The investment includes the reconstruction of the inner pier and construction of marinas with mooring capacity for 106 boats. There will be a new pier that can dock yachts and sailboats up to 25 meters in length but it will take time and hard work since the old concrete breakwater from the port is in very bad condition dating back to the time of Francisco Piria the founder of the city. The idea is to reduce the pounding waves and keep the marina safe. It will be a sophisticated hydraulic engineering task indeed.

The new port of Piriapolis will include three new marinas, one for craft and two for sport fishing. The works, which will double Piriapolis´ port capacity, will take 3 years to be completed and will cost  $20 million.

A pedestrian path, a path on top and one on the bottom of the pier and the construction of breakwaters are also planned. These are arranged parallel to the coast, and will have a length of 50 meters.

The second phase of work to be implemented in 2015 and 2016 consists of another pier in the farthest part of the coast for boats up to 100 meters in length an could receive small cruisers.

As part of the reforms, the boats arriving to the new port of Piriapolis will have water, electricity and lighting and also may have a water network to combat any fires. Also the catering and access to the sailboats will be improved.

The investment of $20 million in the expansion and modernization of the port will generate significant revenue for Piriapolis since it will attract new visitors and will surely position Piriapolis as a port very similar in terms of level of service, as the neighbour port in Punta del Este. Although they will stop building in Decembe and during summer, they will resume work in March 2015. 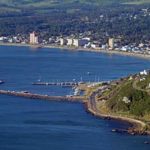 A Bit of History

The Port of Piriápolis was originally a work of great size back in 1913. To build it, it was necessary to remove part of the Cerro del Ingles, known as the Cerro San Antonio. Most of the quay wall around the breakwater was built with red and brown rocks that weighed over a ton and were extracted from this hill. The port was destroyed twice by sea storms, and the project was eventually completed in 1916.

In December 1997 the port installed better nautical facilities and the docking facilities for boats were improved. Since then port allows the entry of sailboats, fishing craft and even ferries such as the Buquebus arriving to and from Buenos Aires.

The remodel of the port of Piriapolis in not the only one undergoing changes. As one travels around Piriapolis, it is easy to notice the real estate investment growing. New recycled full residence hotels offering more than 3,000 beds, semi luxury buildings and land with very ambitious projects are added to the offers.

One of them is the San Francisco complex,  facing the sea, and located in a privileged location, away from the noise of downtown, surrounded by hills and forests but very near as well to the promenade.

The new apartment complex San Francisco development is very near the best beaches with large dunes, white sand and crystalline waters, with an amazing view over the bay of Punta Colorada, known for the best fishing for mackerel and sea bass.

Each apartment of one, two and three rooms with terraces offers unique panoramic view to the beach, fully equipped kitchens and modern furniture.