A young killer whale, rarely seen in this region, was seen days ago in waters near Punta Del Este and Saturday in La Paloma, Rocha.
During the last days of August 2015, the photographer of Punta Del Este, Álvaro Pérez Tort, reported the presence of a killer whale in front of the resort La Barra, about 100 meters from the coast between the beaches Posta Del Cangrejo and Montoya; moving alone towards Punta Del Este.
The well-known photographer Alvaro Perez Tort recorded several moments of the jumps and flips performed by the huge mammal, a species of whale that is not commonly observed in this region of Uruguay, like the right whale which comes each season in larger numbers.
On Saturday the same killer whale, seen in the area near Punta Del Este, surprised a group of observers of the Organization for the Conservation of Cetaceans (OCC) Uruguay on the coast of La Paloma opposite the lighthouse.
The killer whale performed stunning jumps and showed its whole body only 5 meters from where the boat, occupied by OCC director Rodrigo Garcia and a group of photography students, was out on the water. The meeting was as unexpected as impressive leaving the boat crew astonished.
The massive creature approached the boat between the lighthouse of La Paloma and the port breakwater and showed its power. Then it just swam away track heading east towards Punta Del Este.
The OCC director concluded that this is a young killer whale of about 5 meters, species Orcinus orca and seemed to be swimming alone along our coastline.

This is not the first time that the killer whales visit the southern region of Uruguay and only in February 2015, 6 killer whales were spotted about a mile away from Punta Del Este´s port.
A small group of visitors from the international cruise line Oceania, was returning from a trip to the Island of Lobos, when a group of killer whales was seen headed to Island of Lobos. The group of orcas included 2 baby whales.
Emerging from the water and diving again, the classic black and white colors that characterize this species could be appreciated. There was surprise and fear in the presence of one of the largest predators on the planet.
The island Isla Lobos is one of the largest colonies of sea lions, including a hair (byronia Sea lion) and the fur seal (Arctocephalus australis). There are also some specimens of elephant seals. Sea lions are part of the diet of killer whales. The herd was aimed precisely at that place and it is likely they had a feast.
Although it is very difficult to detect them in this area, they generally come briefly in autumn and spring and is those times they can appear. However, it is very difficult to see them, especially at this time. They are very intelligent animals and have a peculiar way of communicating between them. 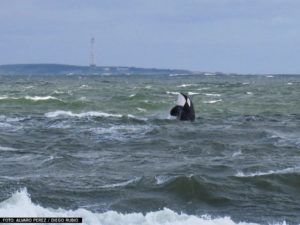 Meanwhile the long-awaited season of the Southern Right Whales sightings in Uruguayan shores is at its moment once again. Visitors from all over the world come to enjoy the sights of the Southern Right Whales. While the actual season runs from August to October, sightings in June and July are common, and since 1995 have quickly gained the interest of tourists and the scientific community.

The whales come to calm Uruguayan waters to mate and give birth to their young, preparing calves for the arduous journey of migration. In Uruguay, sightings in Montevideo, Piriápolis and Punta Del Este and in Rocha have become a form of entertainment and friendly learning environment.
With observation platforms installed on the coast from Montevideo to Rocha and excursions available that follow the path of the whales, the journey of the largest mammals in the world has become easier. OCC guides carry out these tours, based on whales preservation protocol, ensuring their conservation and the safety of tourists.
On the other hand, if interested in whale watching, head to the coast of Montevideo, Maldonado and Rocha with your binoculars and with a little patience and a little luck you can envision a show that is given only once a year on the Uruguayan coast.
It is possible to observe southern right whales, in their traditional migration that allows them to fulfill their reproductive cycle. The whales are heading to southern Brazil, where newly born calves learn to survive and then accompany their mothers and all their relatives back to Antarctic waters.
This migratory cycle, which increased in length of stay in recent days could be a sign there are changing factors may be due to higher temperatures than in previous years.