This fifth edition of the Wine and Food Festival in Punta Del Este 2013 held at the Mantra Hotel  this last week-end was a success, as it not only exceeded the expectations of visitors and exhibitors, but received significant recognition of the local and regional press.

ic in Punta del Este, and for two consecutive days and despite being in a quiet month of winter the „Hall of Mantra“ received no less than 1500 attendees in this 2013 Wine and Food Festival at Mantra event.

In the renovated Ballroom the representatives of important local, regional and international wineries gathered to offer visitors of  the Wine and Food Festival in Punta Del Este 2013 the opportunity to taste great wines from various regions and savor delicious products like cheese, ham, olive oils and chocolates, among others. 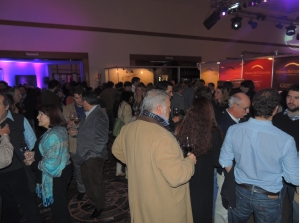 On this occasion at Wine and Food at Mantra, Agroland introduced its award-winning olive oils, among others Grand Cru and World Wines – wine shops, distributors and importers of famous wineries from around the world presented their new highlights. Also the authors of the Guide to Wineries & Wines of Uruguay, Juan Vasquez and Greg de Villiers, gave an introduction to the Uruguayan wine and its leading producers. The Freixenet Spanish and Argentina Bodega del Fin del Mundo had their own stand as well at Wine & Food at Mantra.

Compared to previous editions of Wine and Food at Mantra, there was a greater presence of high quality gastronomy with a more strategic interconnected circulation facilitating food and beverage, making the tasting was much more enjoyable.

Besides, Casino Mantra amused the audience with its Texas Hold’em Poker and taught the secrets of the game to all of the visitors of Wine and Food at Mantra.

There were also plenty of prizes for participants at the Wine and Food Festival in Punta Del Este 2013 such as treatments in“ The Balance Spa“ – also stays at the hotel were raffled among those who attended the Wine & Food at Mantra.

Mantra has successfully worked at attracting tourists throughout the year, and Wine and Food at Mantra is an example high quality event that continuously develops business opportunities for wineries and restaurants.

A toast to the visitors another one to exhibitors of  Wine and Food at Mantra Resort, who allowed to taste more than 200 labels of the finest domestic, regional international wines together with high-end gourmet products.